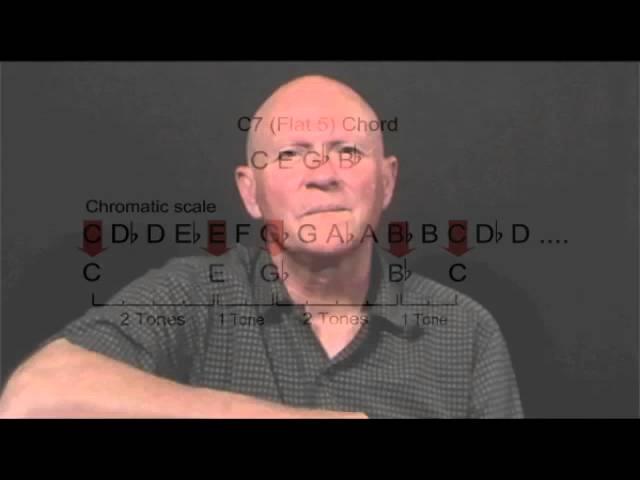 Video script:
Continuing our look at some of the more peculiar chord relationships let’s take a quick look at these two 7b5 chords.

There’s something odd going on with these two chords, but the big difference between the key signatures makes it very hard to spot what it is…So let’s zoom in and work out the names of the notes in each chord.

The C7b5 is made up of C E Gb and Bb and the Gb7b5 chord has the notes Gb Bb Dbb and Fb… Still not easy to spot the oddity because as we explained in the last lesson, exotic chord relationships often take cover behind enharmonic equivalents.

You could see these as just coincidences, but when two chords of the same type but with different roots share the same notes it almost has the effect of a magic trick – we can’t believe what we are seeing – or perhaps hearing in this case.

But once we learn how this magic trick is accomplished, the mystery disappears. And in this case the mystery is revealed by plotting any the 7b5 chord against a chromatic scale:

Now we can see that the interval between the notes has a repeating pattern – 2 tones, 1 tone 2 tones 1 tone. Clearly this pattern is identical whether we start on the note C or the note Gb – three tones further up the scale.

Because the pattern repeats every three tones it is often referred to as tri-tone symmetry. And the idea of the tritone acting as a pivotal point in a musical scale crops up in other contexts as well.

So what is this bit of arcane knowledge good for, I hear you ask. Well next time you are watching a horror movie listen hard to the soundtrack and you may well hear these chords, or other symmetrical chords, used to help build the suspense…